I feel like all my beautiful elves and draenei are back to their real hearts…so beautiful…well done, Blizzard.

Drov the Ruiner was awake today, and there was a group, and I got Pepe. What was I worried about? No one knows.

Disoriented doesn’t begin to describe the patch. But it’s good to start fresh, you know? Sometimes with a clean slate and all. And instead of cleaning up the rug and the paper towels the puppy chewed, or heck, even taking a shower or eating lunch, I decided I would see how the warlock was doing. First, of course, I had to transmog her:

And then she wanted to try out her skills in Ice Crown. So she did.

And then one of the Captains said, “Victory will be ours.” And today, his cadence was a bit different, and something…shifted. I knew Arthas would give me his horse, Invicible.

Friends ask if I’m ready for the Patch tomorrow.

What am I doing?

Trying to get a little bird.

Not this one anymore, at least, well, not in the traditional way.

How’s that working out?

Momokawa’s been doing these, because the little bird, her hippie nature, and her voting record seemed to be a good fit. She still needs Drov the Ruiner, (is he like my puppy, Ruiner of Carpets and Shoes?) and Tarlna the Ageless. It would appear that each of these only spawns once a week in Gorgrond.

This is how Azeroth has been for me for some time now. A huge ticked-off list and then one last thing is out of reach. Every damn time. The dragon one.  This one. And even this stupid one because I can’t figure out how to hold hands with my pet and when I depend on Young Elite Druid to do the spine part for me, and he’s “busy.” *eye roll*. It feels like everything is left incomplete, and that’s starting to get on my last nerve. The same is true in the Matty-shack, too. I have no less than 20 half-started projects going on.

I am full of good ideas.

Now if I can only get full of achievements. 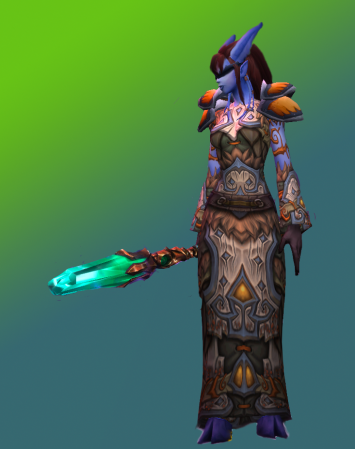 This is Sajja, a monk. See that pretty robe she’s wearing? Nightfire Robe? Well, Miss Shaman had some gold to burn, and saw the pattern on the BMAH for about 1kgold. She really wanted it, so over bid. And won. For 4kgold. And then promptly saw three of the same patterns for sale on the regular AH for about 143 gold.

I need to stop playing this game.

That’s all I need to say.

So many of you have been enjoying the Legion PTR, giving us great tips so we’re prepared, but alas, I am going full-on grasshopper, screw the ants, being lazy, making stuff, and doing whatever is my fancy. For a few months, something wasn’t right — my hips constantly hurt, and turns out I have mild arthritis in both hips. It’s okay — I’m going to make sure I keep walking, etc. but sitting and playing for hours isn’t and can’t be my life anymore. If I sit for awhile, I need to be writing or planning. Or planning writing. Mataoka hasn’t spoken to me in a while: every time I log on I sense this sentient-being exasperation coming from her. She is bored. She’s dying to redecorate the Garrison, or do time walking dungeons a BIT MORE FASTER PLEASE, but alas, none of these things are in her control. And perhaps that’s the heart of boredom: when we don’t feel any sense of control, we give up. And when we give up, nothing engages us.

I know there are a few things that I will regret if I don’t do before Legion comes out, but damn if I feel like it. I haven’t even seen the Warcraft movie yet. (!) I will, I will…maybe even tomorrow. For now, I’ll just enjoy spreading a few pixels around and gazing at her pretty face. She’ll find some substance soon.

Between me and Tome we’re falling apart. She can’t sit, and I can’t seem to stand enough, and well, just damn. Today I’m home with the wussiest of all things — double ear ache. Nothing dramatic, just need to find some Claritin and clean MY DAMN HOUSE.

Because relatives will be here soon.

And I’m depressed about politics.

But I did finally manage to get enough crystal thingies for the doohickymabob. I am so far behind everyone, and all my buddies got Betas for Legion, and well, damn.

Okay. Enough of this. I’ll come back when I have something more interesting to say.

I really hate the new Instagram logo.   And I’m not sure why I give two poops. Reading rationale and “you’ll get used to it” from the designers, (yes, we took your adored, beloved, cherished skeuomorphic little cutey-pie app logo and made it look like every other turd design out there) I had a moment of PTSD for when Blizzard changed our models, and told us, too, we would ‘get over it.’

What the f*ck is that, anyway? Is it the special snowflake bullshit for 20-30 somethings,that every piece of art is refrigerator worthy? I’m sorry to break this to you, gentlemen, but you are amateurish.

Are there bigger problems in the world? Yes. Am I getting my panties twisted? Perhaps. Just for once I’d like something left alone.

*I miss my Draenei*

What was I JUST SAYING?

Being a newshound, I couldn’t help but notice some concerning details with the new Hearthstone packs: namely, a whole lot of political forces came crawling out of the wormwood from Darkshire, and the main town of Duskwood.

Now we all know and love Duskwood, Darkshire: the townsfolk are full of mystery, and never seem to tire of searching for lost necklaces, stargazing, and talking about ghosts and ale with the seductive tavern mistresses at the Scarlet Raven Tavern.

But something…something is spooky about this. There’s talk of xenophobic mishandlings of the Goblin Insurrection of ’07, not to mention that rumors are flying that the Scarlet Raven has been bought by an off-shore contingency with a Dalaran address. Some say the new councilor plans on building a wall around the town and making Westfall pay for it. And don’t forget the underground sewer movement of millennial mages wanting free tuition at the Lady Jane School of Magic. Climate and pollution protesters have been marching incessantly at the Booty Bay fishing tourneys, too, charging the Big Fel Companies with fracking poisons. (Activists discovered an assortment of fel-debris choking the reefs. That Legion rain comes at a cost!) Some warlock from the Slaughtered Lamb also touts her political savvy and “turn” –no one is quite sure what she’s talking about but she seems to be very assured that she is next in line for something and has sent her minions to post flyers around the town obstructing others from reading public postings. (Ravenholdt Manor hasn’t made an official statement, but underground reports of Stormwind financing seem to hold water.) An older paladin with white hair and a gravelly voice speaks nothing but truth and his warriors continue to zealously fight for the light. They will never yield to the questionable antics of warlocks, and have made it clear.  Meanwhile, a demonic imp holds tomes high in the air but covers the runes so the good citizens of Azeroth can’t read it, but many say he is in cahoots with Sargarean forces. Spokespeople from the Sargarean Cults confirm, however, he was denied membership. He was, in their words, “a miserable son of a bitch.”

Meanwhile, Darkshire’s public buildings continue to have large DURUMPF signs raised to the top of the towers while lower-income dwellings have been razed to rubble. Abercrombie’s makeshift hidey-hole tower is gone, as is Madame Eva’s shack. In their places are a Wholeylight Food market and Starkbacks. Suspicious.

Be on the lookout, good citizens of Azeroth: watch for creep in gold prices and angry mobs. Things are getting a little too interesting for this Draenei. Time to get back on the ship and fly north.